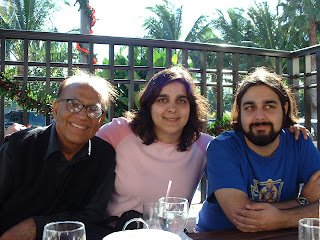 I am thankful for emigration.

My father was born in Calcutta in 1939. His family rode the death trains in 1946, after their apartment complex was firebombed. They ended up in Karachi, with the rest of the IDPs, who, of course, became refugees once the subcontinent split. In 1962 my dad went to Canada – to study at McGill – and never lived in Pakistan again.

I am a native speaker of the world’s language of privilege. I have never gone truly hungry, I have two degrees, and I didn’t give birth until the age of thirty. These things are true not because of any particular giftedness on my part. They are true solely because I was born in Syracuse, New York instead of Karachi, Pakistan.

This wouldn’t be true if my father had left school when his parents wanted him to. If he’d decided to study in Islamabad instead of Montreal. If he’d married the girl arranged for him instead of choosing my mom and breaking with his family. If he’d married a woman who could go back to Pakistan with him.

One path un-followed, just one, and I would not be the aid worker blogging here about the need to treat your local partners well. Instead, I’d be that local partner fighting for respect. I’d have less money, more health risks, fewer choices in my life and a shorter life in which to make those choices. I’d have to struggle to make a good life instead of having it handed to me.

And I remember: I did nothing to earn this.

(photo credit: my mom)
From left to right: My dad, myself, my brother. Maybe six years ago.