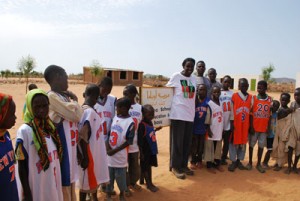 Updated on July 13 – Enough has issued an apology for this poorly handled distribution, and committed to doing better in the future. You can see their apology here. I was impressed; it was like a case study in how to take criticism with grace.

The Enough project works in advocacy against genocide, particularly on Darfur. All well and good. I don’t know much about the intricacies of Darfur, or the intricacies of advocacy. I know some people think Enough is too heavy on the celebrities, and others think they do good work. That’s not what this post is about.

This post is about the idiotic, dehumanizing, tacky stunt they pulled in a refugee camp in Eastern Chad. They brought a limited number of New York Knicks jerseys on a visit to the camp, and made the kids fight for them. You don’t believe me? I will quote the blog:

“(We) separated the children into groups based on which blocks in the camp they lived. Then we began to hand the jerseys out as evenly as possible. The scramble began, and within minutes the jerseys were devoured. Though we informed them that we had no more to give, the children still scrambled up to us to peer into the empty bag to ensure a jersey had not escaped our notice.”

Okay, not fight – scramble. And note the dehumanizing language – devoured – like the kids are starving animals. This makes me mad. Refugee children are human beings with human dignity who should be treated as such. Enough just came and taught the kids that there isn’t enough for everyone and the good stuff goes to the strong and fast.

Now you ask – what would I have wanted them to do? Well, first of all, I would posit that there is no reason to bring New York Knicks jerseys to a refugee camp except to feel good about yourself. If you are determined to bring the jerseys I still have three suggestions:

All of these would take more time and effort than just carrying basketball jerseys to a refugee camp and throwing them at kids. It’s worth it.

At this point, I would like Enough to make sure this doesn’t happen again. I’d like them to develop guidelines on appropriate donations and methods of donations for visitors to camps. They should refuse to visit camps with any group or individual who does not follow those guidelines. And they should publish those guidelines on their blog for public review and comment.

PS – If you don’t want my advice on how to handle a distribution to refugee children, may I recommend the Sphere standards?

I’d appreciate it if anyone who reads this post would go over to the Enough post, tell them what you think of this dumb stunt, and leave a link to this post.