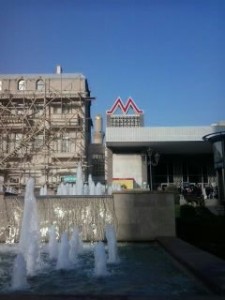 Some of you may have noticed I started using all my own pictures in this blog a while ago. I pull them from my Instagram, which is reasonably active. I have found taking pictures helps me think in new ways about the places I live. I always worried that photography would turn me into an observer instead of a participant, but it seems to be making me a better participant, instead.

I am going to start highlighting some of the pictures I’ve taken that really helped me do that. Not necessarily the nicest ones I’ve taken, but the ones that helped me think.

This photo, of the metro stop closest to my home in Baku, is one of about about twenty I took of that same place on different days. It just perfectly encapsulated the Baku experience for me, so I kept taking pictures. The metro, first. Because Baku is genuinely urban in a way that not all cities are. It’s dense, busy, and and full of traffic. It’s expensive, hard to drive in, and people live in apartments, not standalone houses.  It’s exactly the kind of place you picture when you think abstractly of city. The metro represents that to me.

Next, the minaret peeking out. Because Baku is a Muslim city, and forgetting that doesn’t help you understand Azerbaijan.

The construction, because Baku is a city in the middle of an oil boom.

And finally, the fountains. The Soviets were obsessed with building fountains in dry places, to display their generosity and the value of being  a citizen of a Soviet Republic. If you were part of the USSR, you got fountains in the desert. (And, for that matter, excellent public transportation.)