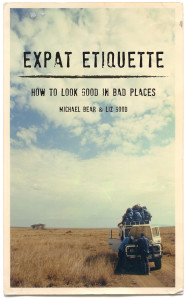 All the cool kids have already written about this, but there’s a fun new book out on being an expat. It’s called Expat Etiquette: How to Look Good in Bad Places, and it was written by Michael Bear and Liz Good. They sent me a preview copy, and it’s a short, clever book that’s both fun and useful.

The first nine sentences make it clear what to expect:

“Going overseas is hard. Leaving friends and family behind. Traveling to a country where you probably don’t speak the language, and definitely don’t understand the culture. Foreign foods, foreign diseases. Loneliness.

Of course, it does have its compensations. Smoking. Casual sex. Functional alcoholism.”

How can you not enjoy that book?

I particularly like the advice on haggling with taxi drivers:

“He – it’s invariably a he – will charge too much. Far too much. You have two options:

1. You can accept this with a zen-like state of calm. Counter-offer with half the fare. Settle on something like one-half to two-thirds of the original price.  Consider the overpayment your small contribution to the local economy. Smile.

2. Alternatively, you can get indignant. Let the cabbie know that you know that he’s overcharging. Say that you live here, that you know how much the cab fare should cost. Raise your voice.  Counter-offer with half the fare. Argue. Settle on something like one-half to two-thirds of the original price.  Spend the balance of the ride fuming over the fact that you were ripped-off.

Of course, none of this applies to your favorite cabbie – the one with whom you’ve developed a relationship, the one whose phone number is on speed-dial in your phone, the one who drives you around on a regular basis.  He’s still over-charging you, but his services are, on the whole, worth more than gold.  It is always important to find this favorite cabbie, and then be stingy about sharing his number with other expats. If you are too generous, within a matter of weeks he will be too busy to pick you up on time anymore, and you will be forced to find a new favorite.”

Expat Etiquette does have a certain self-published feel about it – I think one more edit could have tightened it up and made it read more smoothly. But it’s a useful, funny, little book and you can purchase it for just $3.49. Go buy it.

One final note: the book swings back and forth between sincere, useful advice and terrible satirical advice. I trust your ability to know which is which, but at least one Amazon reviewer did not.

Disclaimer: If you buy the book through my links, I will earn approximately 2.5 cents on your purchase. I promise not to spend it all on one place.