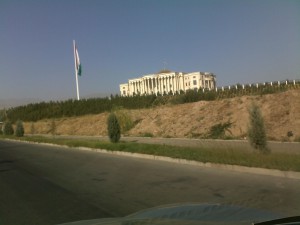 J from Tales from the Hood posted his “why I do this” story recently, and reading it started me thinking why I do this work myself. There’s a lot of twisted up stuff in my explanation – about wanting adventure, and doing what you’re good at, and the things my parents expected of me. But it really comes down to this:

It’s an awful fucking world out there. We are wrecking our planet, from Lake Erie to the Niger Delta. We’re killing each other with bullets and machetes and pollution and indifference to the needs of others. Humans are devastating machines that decimate each other and everything around us.

I can’t stand still while that happens. I don’t honestly think I am going to do much good. What can one person actually do? But the only way to avoid despair is to take action. If I didn’t try to do something I would never get out of bed. I took the action that struck me as most needed and – truly – most fun. International development. I like living overseas. I like learning other cultures. I like facing the weird problems of this life and knowing how to open a metal can with a paring knife. And I believe that poverty in most of the world is far worse than what we have in the US. (Even taking into account Mississippi and Appalachia.)

And I turned out to be good at it. Going to grad school for global health was like being a fish who finally found water. After flailing my way through Georgetown, fighting and bleeding for a GPA that rounded up to 3, I sailed right through my graduate degree and finished with a GPA of 3.97. And it wasn’t even hard. It was a lot of work, but it was joy.

Once I do something, I don’t do it badly. If I am going to work in international development I am going to do the best possible job of it that I can. That’s why I have this blog – to help me figure out how to do it better. That’s why I read so much (I link to most of it on my Twitter feed).

So I work in development because I have to do something, and this is the something I like best. I do it as well as I can because I’m an obsessed perfectionist. It’s not enough. It’s never enough. But it’s what I’ve got.

If you’re looking for the career-type info on how I ended up doing this, it’s very calculated. Here’s the short version, which leaves out all the embarrassing detours:

I have wanted to be an aid worker for literally as long as I can remember. When I was 16 I decided to go to Georgetown because it had a good reputation for international relations. I choose my work-study job to be internationally focused. I interned with a small international NGO. My first job out of school was a disaster, but the second was an internship with the American University in Cairo that let me live in Egypt for a year. While at AUC, I figured out I needed grad school, and an MPH, for all the jobs I really wanted. So I went to grad school, and interned and networked and studied foreign language while I was there. Then I finished school and networked my way into an unpaid internship in Uzbekistan. I got a paying job in Tashkent after that and the rest has been pretty standard.

(Photo credit: me. I took it out my windshield while driving the other day. It’s the tallest flagpole in the world, shown next to the president of Tajikistan’s palace.)

Well, no. Actually I’m going to New York to cover the MDG summit, which is way better for a development geek like me. If you’re going to be there too, comment. Maybe we can cross paths. If there’s an MDG event you’d particularly like me to write about, comment and I will try to hit it and report back. If you have helpful advice for how to get the most out of this week, comment and offer it.

This is an exciting opportunity for me, and I want to share it as much as I can. Let me know how, and I’ll do my best.

What if we renamed Chagas to “blood sucking assassin bug disease?” I sexify NTDs over at End the Neglect.*

Just to demonstrate that I have range, I also have a post up at UN Dispatch, looking at the possible outcomes of the events in Kyrgyzstan.The scenarios range from almost good to very, very bad. One question I get asked very often by readers of this blog is how I got funding for my first overseas internship. It was an unpaid position with a multilateral organization in Tashkent, Uzbekistan, and it pretty much launched my global health career. It led to the job that led to my next job and so on and so forth until here I am now with enough experience that I believe myself capable of blogging about it.

My answer generally depresses people: I didn’t get funding. I estimated how much it would cost me every month to live in Tashkent. I figured out how long I wanted to stay – six months. Then I got a job, saved up my money, deferred my student loans, and got on the plane to Tashkent.

There is funding for overseas internships, but most of it seems to be for graduate students. I actually ended staying at my internship for a full year, funding the extra six months with a US government fellowship that no longer seems to exist.

But I got to Tashkent on my own, and I don’t think I could have gotten that fellowship if I wasn’t already there.

I was lucky, I know. I had student loans that could be deferred, and I was able to find work that let me save money. But I don’t have a trust fund and my parents haven’t helped me financially since I was 18. (Yes, Mom, I know you would have. But it didn’t feel right.) (What, no one else’s mom reads their blog?)

I can happily recommend the place I worked to earn the money to go to Tashkent. I was a faculty member at NYLF, the national youth leadership forum. They teach specialized week-long programs to high school students on topics like medicine and international affairs. I had a ball teaching high school kids, and learned a surprising amount from the site visits. Plus, you stay in the program hotel with the kids so I had no living expenses to contend with. NYLF is pretty much always hiring faculty instructors, since that much time with teenagers will burn you out fast.

I’ve got a new post up at Damsels in Success, about getting fired from my first job. It has nothing to do with international development, but I’m pleased with it nonetheless.

I’ve had an odd career trajectory, but it’s one I am generally very pleased with. I think that having had many jobs, and many different kinds of jobs, lets me bring a perspective to international development that someone on a less circuitous path might not have.

I love that we are first in and last out, that we’re boots on the ground when the bullets are still in the air and we stay until we’re genuinely no longer needed. I love our unruly and brilliant country directors. I love that this is the smartest group of people with whom I have ever had the pleasure of working. I love always having someone to talk to on skype. I love that everyone here has field experience and is mysteriously lacking in any sense of self-preservation.

I love being part of a team, a team that does something that matters and does it well. I love the way this job combines competition and idealism, that we set out to help people and we set out to win. I love winning. I love that my job is difficult but I can do it anyway. I love that most of us would be completely helpless when trying to do our work if it wasn’t for all the other people who fill in the gaps. I love the way everyone here has a useful background, be it child survival, sociology, engineering, or the marine corps. I love working in an office that is highly tolerant of eccentricity. I love being judged on results and not how well I know my place in the hierarchy. I love having keys to the office.

I love the way people’s eyes light up when I tell them what I do for a living, once they finally understand. I love that the list of the places we work sounds like a travel guide from hell. I love hearing the taser crackle in the middle of slow afternoons, and that one day we had to send Amy up to the roof because of the tear gas. I love watching Al-Jazeera (and occasionally the world cup) scroll across the TV, and the PR guy sprint down the hall for some urgent media reason.

I love that even though we need the money to do what we do, it’s not actually about the money. I love having MSF hand over their hospitals to us because they leave at arbitrary points and we struggle and suffer and scream to stay, as long as there is need. I love that everyone I’ve met is still an idealist at heart. I love the thousand layers of bitter cynicism that covers the idealism. I love watching the news and knowing that I can do something about it, even if it is only a tiny bit.